Loving Others into a REAL Relationship with Jesus

At the core of who are and will always be, we live to love others into a REAL relationship with Jesus!

[et_pb_vertical_timeline _builder_version=”4.9.10″ hover_enabled=”0″ sticky_enabled=”0″ background_color=”#FFFFFF”][et_pb_vertical_timeline_item use_read_more=”off” font_icon=”%%189%%” animation=”off” _builder_version=”3.0.89″ text_font=”||||” headings_font=”||||”]Long before Vanguard Church came into existence, it was a dream birthed in the mind of God. He had in mind a place where people could share their spiritual journeys and experience the love of Jesus Christ. The dream of a “vanguard” type of church collided with my life in different ways over the years. However, it wasn’t until 1996 that God began to inspire our Senior Pastor and his wife with the “who, when, where and how” that would become Vanguard Church. The picture was not altogether clear at the time, but God gave us enough of a vision to know that we wanted to start a church that would live out the mission of loving people into a REAL relationship with Jesus Christ.
[/et_pb_vertical_timeline_item][et_pb_vertical_timeline_item title=”It All Began” timeline_label=”March 1997″ use_read_more=”off” font_icon=”%%190%%” animation=”off” _builder_version=”3.0.89″ text_font=”||||” headings_font=”||||”]

In March 1997, our sister church, Chapel Hills Baptist Church, allowed us the wonderful opportunity of using their fellowship hall so that we could start having services. On March 2nd, through radio advertising and with about a dozen committed people, we launched our first service with 75 people present. This was the beginning of a dream realized and a mission lived out. Every Sunday night, we hosted what we called an “R-Rated Service” which reached an audience that was very young, mostly single, and overwhelmingly lost. Once again, it was a very scary yet exciting time as we began to see people commit their lives to Christ.
[/et_pb_vertical_timeline_item][et_pb_vertical_timeline_item title=”Time to Move” timeline_label=”September 1997″ use_read_more=”off” font_icon=”%%189%%” animation=”off” _builder_version=”3.0.89″ text_font=”||||” headings_font=”||||”]

An opportunity came on September 7, 1997, when the doors opened for us to move into Challenger Middle School. We immediately transferred our Sunday night services to the new location, then the next month we started our Sunday morning services and children’s ministry. For six months we ministered at Challenger, and we watched our community grow to about 150 people. The dream was expanding and new lives were being challenged to carry out the mission of Vanguard.
[/et_pb_vertical_timeline_item][et_pb_vertical_timeline_item title=”First Permanent Location” timeline_label=”March 1998″ use_read_more=”off” font_icon=”%%190%%” animation=”off” _builder_version=”3.0.89″ text_font=”||||” headings_font=”||||”]

In 1998, God gave us the incredible opportunity to move our new community of faith into a semi-permanent facility at Flintridge and Academy. On March 1, 1998, we held our first services in the new facilities. It was so exciting to have the ability to host Sunday morning, Sunday evening, and Wednesday night worship services, as well as have office facilities for the staff and beautiful rooms for the children’s ministry. However, despite the amazing new opportunities, our move to Flintridge was a huge financial step of faith for our young church. However, God raised up many dedicated givers in our community of faith. Over and over again He confirmed that the dream of Vanguard is His, not ours. We are simply blessed to be a part of this amazing and miraculous journey.
[/et_pb_vertical_timeline_item][et_pb_vertical_timeline_item title=”God Did the Impossible” timeline_label=”October 2000″ use_read_more=”off” font_icon=”%%189%%” animation=”off” _builder_version=”3.0.89″ text_font=”||||” headings_font=”||||”]

Once again in 2000, God was faithful to do the impossible. He carried on the dream of Vanguard Church by opening the doors for us at the former Academy Station Six Theater complex. We originally dreamed and hoped that Vanguard could be housed in a movie theater. On October 1st, 2000, about a 100 people gave up their Sunday afternoon to help Vanguard move to this, our present location at 3950 N. Academy. A week later, on October 8th, 2000, we held our first worship service in the new facilities.
[/et_pb_vertical_timeline_item][et_pb_vertical_timeline_item title=”It is Ours” timeline_label=”May 2006″ use_read_more=”off” font_icon=”%%190%%” animation=”off” _builder_version=”3.0.89″ text_font=”||||” headings_font=”||||”]

On May 19, 2006 Vanguard experienced a five and half-year dream come to fruition. The finance company called and told us, “You own the building and the land.” We were now proud owners of a 27,000 square foot facility and about 3 acres of land.  In January of 2007 we added our main worship center, Theater seven and 20,000 more square feet to our facility. Easter 2010, we were praying God would allow us to love more people into a REAL relationship with Jesus Christ. We had 2282 people here for our weekend service. This is the first time in the history of our church we have had 2000 plus people here for one weekend.

[/et_pb_vertical_timeline_item][et_pb_vertical_timeline_item title=”We Birth Our 1-5-7″ timeline_label=”January 2010″ use_read_more=”off” font_icon=”%%189%%” animation=”off” _builder_version=”3.0.89″ text_font=”||||” headings_font=”||||”]After this season of favor, Vanguard experienced a season of great grief and loss from January 2010 through the end of 2012. Our average weekly attendance dropped to 800 people. It was a very difficult season for our church. Our leadership at one point offered Vanguard like Abraham offered Isaac. We believed Vanguard was of God but like Abraham with Isaac, we also knew that God was asking us to offer Vanguard to Him. Fear was our greatest companion in 2011.

In the midst of this sacrifice of Vanguard, our leadership had re-ordered the priorities of our church and nailed down our 7 Core Expressions as a church. We birth what we call our 1-5-7.

One Mission:
to love others into a REAL relationship with Jesus.

Five Core Values:
A Lover: love others and God
A Servant: find ways to serve others
A Prayer: pray over everything
A Steward: faithful with time, possessions and money
A Multiplier: Disciples, Leaders and Churches

In March of 2017 we celebrated 20 years of God’s faithfulness to us as we celebrated Vanguard’s 20th Anniversary. Vanguard, today, is on the frontlines taking hits and running risks to love the lost into a real relationship with Jesus Christ. We are a church that wants to be known like Jesus, “A Friend of Sinners.”

We have one mission as a church and that is Jesus. We want people to experience the love of Jesus Christ. We are also happy to report that in 2012 our church started growing again financially and numerically again like the early church in Acts. We are once again seeing scores of people come to Christ and we are very grateful for God using us to advance His Kingdom.
[/et_pb_vertical_timeline_item][et_pb_vertical_timeline_item title=”Our Third Location” timeline_label=”October 2017″ use_read_more=”off” font_icon=”%%189%%” animation=”off” _builder_version=”4.9.10″ text_font=”||||” headings_font=”||||”]

As we continued to live out our mission of loving other into a REAL relationship with Jesus, God lead us to take more ground. In October 2017 we launched a third location in the Briargate area. 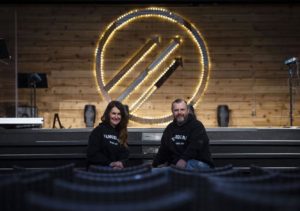 Featured in the Gazzette:

“What some people would call a coincidence, the Rev. Kelly Williams, pastor of Vanguard Church in Colorado Springs, sees as absolute evidence of God’s blessings…”

We are now a church that fluctuates between 800-1300 people in the weekend services depending on the time of year. Moving forward, we continue to seek to love more people into a real relationship with Jesus Christ through serving the local community, multiplying disciples, leaders, and churches, and caring for one another through Life Groups.

It is still our goal to baptize 50k people and plant 5k churches by the 40th anniversary of Vanguard in 2037.

To date Vanguard has baptized 3211 people and helped plant 45 churches in partnership with the Southern Baptist Convention, 20 other churches, and over 240 leaders from 30 different denominations.

Join us for one of our 3 weekend services in the coming year at one of our two locations in central Colorado Springs, and in Tri-Lakes area as we seek to love more people into a real relationship with Jesus Christ.